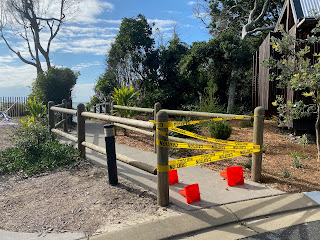 It was this time of the year, 12 years ago that I first walked down this path. The concrete went for about 20m and then opened up onto a wooden deck, I'm going to say about 5m x 5m. All around the perimeter was a bench seat, but the top rail also had a wide rail so you could sit up another level if you wanted. The most obvious thing that made this deck special was that it looked out toward The Pass, one of the most famous longboard waves in Australia if not the world.
But it was so much more than a place to assess the conditions. This was a community building piece of infrastructure par excellence. It was where people sat for hours, sometimes alone, often in long slow conversation. It was where we stood, drink in hand, looking longingly at the line up, swapping theories of wind direction and swell size with whoever else happened to be there at the time. It was where every day at happy hour we would meet and watch the sun disappear behind Mt Warning, where we would share nibblies and watch the last of the crew, board under their arms, drag their weary but happy bodies up the stairs after the light had all but completely disappeared.
In those first few years a set of steps dropped down onto the dune and it was another 20 metres or so out toward the water before it dropped away down onto the beach. (see the cover photo on my Facebook page). Over the years the dune eroded. Eventually the footings of the stairs got eaten by the sea and they had to be rebuilt. Slowly slowly the dune disappeared and a few years ago the tree that we all used to curse because it inhibited the view, fell and was gone, swallowed by the ocean. Instead of cursing it, we lamented its absence. Then last year, after severe storms, the beach took a battering like we'd never seen before. Crockery and glass dating back decades and even longer was exposed. All beach accesses along Clarkes Beach were closed. The camp kitchen a hundred metres back towards Main Beach had to be demolished for fear of it falling into the ocean. As for the deck .... decimated. Cabins were moved back onto what were previously caravan sites. Our sites. It might have been made bearable, if 'progress' had not meant that the caravan park got bought by a corporate operator. The staff who knew us by name, and knew us a group of loyal customers and friends were no more. Loyalty seemed to mean nothing. We grieved while holding onto hope that this special oasis in our lives might be retained.
COVID-19 dashed any hope that this year was going to look and feel anything like winter holidays gone by. As June got closer we learned of more and more people who would not be making the pilgrimage to Byron this year. We've seen each others kids grow up, but our anticipation of the the next generation sharing winters on and around that deck will not be satisfied.
Maria and I are up here anyway, into our third week in the ordinary and little bit odd Lismore caravan park, a kilometre away from where our precious little granddaughter Willow gradually grows strong enough to leave hospital, at which time we will finally be able to meet her. But on this dreary Sunday we drove over and down the hill to Cape Byron, where, despite the grey skies and surreality of the pandemic, Byron still vibrates with its own charm.
When we wandered through the caravan park there was much to feel sad about. Spiffy new cabins stood where our friends had parked their vans for years. No familiar faces. But perhaps more than anything, it was this cordoned off path that hit me the hardest. Still.
Vale the deck, we will miss you.
To all our winter holiday friends. As Alfred Lord Tennyson famously said, "It is better to have loved and lost, than never to have loved at all." We look forward to crossing paths soon.