skin in the game 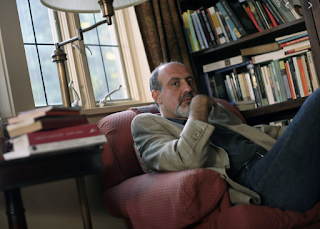 Dipping in to one of his diatribes (more respectfully called book chapters) is like having the curtain pulled away from the plague of what I think of as part-truths that fill our so-called civilised lives. He so brilliantly exposes the status games we are willingly tricked into playing. We punches holes in the respectability of academia with special vitriol reserved for economists and consultants of all kinds.

His latest book elaborates an astoundingly simple proposition: the 'evil dysfunction' (my words) of decision-making without skin-in-the-game. In short, no one should be allowed to make decisions that affect other people unless there is a negative consequence for them personally to parallel any negative implications (intended or unintended) for those on who's behalf the decision is made. And he's not talking about the election cycle for politicians! He's talking about the nature of decision-making when those with power experience the consequences of their choices. Such a simple but profoundly wise idea.

He convincingly argues that skin in the game is not only necessary to make good decisions, but is a prerequisite for understanding the world.

Winners Take All is a book that has had a rocking impact on many progressive, educated people. Taleb's Skin in the Game, while a different genre of book, (Taleb is more philosophical essay, Giridharadas is more popular argument) I think Taleb has nailed the reason why so much of what happens among the progressive social elite ends up being unconsciously self-serving - because we (yes, I include myself) are too often insulated from the both the positive and negative consequences of our activity and interventions.

I'd love to hear from anyone who has read or is reading Skin in the Game; what implications do you think it has for how we work toward positive do social change?