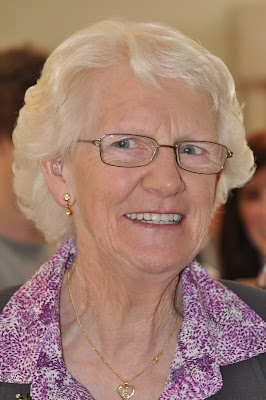 She was so, so consistent. Reliable, stable, unwavering, yet gentle and warm. So much happened in our Leven Street home; every room, the passages, the back porch, the playroom and even the garage where I seldom saw her were domains of all the kinds of living you’d imagine from a family with growing boys and girls, and yet none of it was home unless she was there. In the rare times we were at home without her, it felt like we were simply biding our time until she returned. Without her, life was on pause.

One ordinary but memorable day I arrived home from school to an empty house. No one home. I would discover later that mum had some benign reason for being out, but at the time it rocked my world. It was as if I had walked onto the set of a horror movie where the earth was deserted of life, a ghost town. I felt anxious. I need not have been; everything was in order, there was food in the cupboards, everything was clean and tidy as it always was … but she was not there and it screamed unnatural. As I look back on that ordinary yet bizarre afternoon I realise how committed she was to just to being there for us. She was our life.

In the summer months I would experience a similar feeling when I would wander through the kitchen and living areas looking for her. Obviously not unusual in a busy house for her not to be there, but it felt unsettling when ten minutes later I would still fail to cross paths with her and then again a further ten minutes into my carefree day. And then I would realise as if it had never happened before (even though it did with regular monotony) that she would be deep in the backyard picking raspberries, black currents, or whatever other fruit from our backyard orchard was in season. It used to dumbfound me how picking fruit could take so long. I suspect it was therapeutic relief from a boisterous family, or maybe it was just that picking berries was slow tedious work when there was a family of six that would woof them down in a matter of minutes. Often the precious faire would be jammed or curated into other deliciously sweet food for if she was one thing alongside being a mother, she was a maker.

Oh could she make. Quince jelly, made by straining pureed fruit through muslin, the corners of which were tied to the upended legs of the piano stool, with collecting bowl sitting on the underside. Fascinating viewing. I can still smell the dough of her standard issue fruit cake which was better than any other I'd tasted, mixed in a big plastic blue bowl with a wooden spoon. I’d perch at the bench infatuated with the colours, textures and smells, waiting for that prize of prizes, “Would you like to lick the spoon?”.

From the vantage point of my admiring childhood, there was nothing she couldn’t do in the kitchen. If she was consistent and patterned in the daily and weekly routine of meals, slices and polite hospitality, she was creative and brilliant when it came to cake decorating. I genuinely felt sorry for the poor kids who got sponge cakes as birthday cakes. Then there was the almond icing, ornate lace and flowery magic of the wedding cakes she would decorate. I can still see those hands steadily piping lace triangles onto baking paper in symmetrical consistency. If there is an iconic image of her for me this is it. Patient, creative, methodical, consistent. Timeless.

Through the living rooms, crafted onto what used to be half of the front veranda was her sewing room. If the garage was dad’s domain, then this was her’s. This was the era when the local shop had one, maybe two brands of jeans. And none of this pre-washed, softened stuff. New jeans were like cardboard until they had been worn in. But growing boys’ bodies rarely matched the off-the-shelf generic shape of blue jeans. Enter the dressmaker. The adjuster. The take-in-er, the take-up-er and eventually the let out-er and let-down-er. The manikin, knitting machine, drying closet and permanently set up ironing board took up space, but it was the familiar sounds of the sewing machine in action that marked her territory. I found it curious, masterful and utterly, completely boring.

As much as I feasted off her sewing prowess, I still have an involuntary shudder when I walk past fabric shops. There was little that captured the antithesis of this young boys interest as what seemed like hours upon endless hours of mum feeling, pondering, imagining in the aisles of fabric shops.

I only ever remember seeing her cry ‘properly’ once. And I was to blame. She learned to cook from her own mother in the post war era. Kitchen craft was frugal and simple. On one eventful day mum had decided to give tripe a go. Not only was it a departure from the familiar meat and three vege, it was different in ways that felt like they mattered. It was meat in white sauce. I remember to this day there were also green beans on the plate. I can’t recall what else. I do recall saying one word after my first mouthful. “Yuck.”

My consistently stoic and resilient mother burst into tears and headed upstairs to her bedroom. I am almost certain there was other stuff going on for her, because the reaction was so unusual, but nevertheless, there is a scar on my heart for having exclaimed so insensitively my disdain for bovine stomach lining as culinary fodder.

Mum lived with poise and grace. She always dressed immaculately, comfortably and with modesty. No matter what she was doing, gardening, (of which she did a lot), driving us around, in the kitchen or where ever - she never appeared rushed. She was calm personified. She was warm and motherly. Her laughter was life-giving. Yet she was also guarded and private. Later in life I would wonder who she really was. A strange thing to say about my own mother, yet there were times when I wished I had known more of what made her tick. And I know I hurt her at times.

There was one Easter, maybe in my second year of uni, when I went with a friend to Coles Bay. I left my Hillman at a friend’s friend’s place in Cambelltown and we drove his Corolla wagon across the Lake Leake Road to the East Coast and Coles Bay where we fished and mucked around on the beaches. An endeavour I found both natural, formative and memorable. But, for a mum who had lived her life for her family, a son who doesn’t think twice about not coming home for Easter left a gap. I’m sorry Mum, for all the times I hurt you. I never did so intentionally, but I know that where there is love there is pain. And when that son finds a woman who becomes his wife, and as beautiful as that woman is, she is different in unfamiliar ways and makes claims on the life of her son that cut across existing patterns of dependence, there are big adjustments to be made by everyone.

And then, as time marches on, this colossus, this woman who gave me life and nurtured my soul, lays in front of me in a body that is all but worn out. Her hair is silver, white and clear. Her skin is soft and smooth. Her face is still hers, but carries the years in its curves and contours. I wish her eyes were not as vacant as they are mostly these days, but that too is the mark of a body that has born too much in recent times. It is the middle of the night and the nursing staff are here to turn her. As they pull the covers back I thought I would find the sight of her frailty confronting. But her night dress sits comfortably on her thin body. Her legs are thin but elegant. I am glad she seems relaxed. Her mouth has that typical shape elderly people get without their dentures, but as I sit and hold her hand and her pure hair rests on her pillow, all I see is beauty.