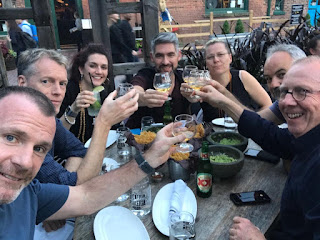 I have great memories of my early international work trips. Primarily, I was energised by the strategic thinking, the sense of purpose and meaning, and my admiration for many of the people I met and with whom I became closely associated within a global network. We believed our work mattered and that together we could change the world.

And there was an undeniable appreciation of the perks of international jet-setting. In those days it was invariably a 747 and pre-911 it was acceptable to congregate in the economy exit rows near the galley, and for a couple of people to sit on the rear-facing flight attendants' seats to form a group conversation. I spent hours with colleagues over the Pacific, dreaming of a better world and consuming the free top shelf alcohol that flowed freely in those days. They were heady days for me and some of my best work memories are from the gatherings I was fortunate enough to attend in north America and Europe. The world opened up for me and I developed a sense of global citizenship, a sense I know was shared by many of my contemporaries in the work we were doing. That was a long time ago and I had assumed with good reason that the feelings that accompanied those formative trips were a thing of my past.

Until this excursion to Canada in 2019. I felt some of the same deep pleasure and professional energy that I had experienced as a fresh faced international traveller. Unsurprisingly, many of the same ingredients feed my experience.

We met extraordinary people. Competent, committed people who had managed to develop innovative responses to significant social challenges. And good people. Not self promoting, narrow minded people, but generous humble people who recognised the value of what they were doing but did not over state it. As we reminded ourselves often, it inspired us to believe in the possibility of a better social environment in Australia.

We had fun. We didn't travel extravagantly, but we ensured that our travel, our accommodation and the food we ate facilitated pleasure. This is not always what is called for, but on a trip that demanded much of us physically, it added a significant dimension. And we laughed a lot. We were discussing serious material but oh did we laugh. There were a few moments that I will remember particularly: The childish excitement during the short-sheeting endeavour; the circumnavigating swim around Wasan Island with Adam; the Mexican dinner in the Distillery District in Montreal are a few highlights. Although not formally part of the trip, time with Bill in The Canadian National Human Rights in Winnipeg was remarkable.

For me, one of the joys was seeing how our immersion in the Canadian context bred collaborative conversations. I loved seeing Liv, Bill and Adam sitting on the park bench outside city hall in Montreal, scheming about opportunities in Geelong. The time Bill and I spent imagining the implications for Give Where You Live's contribution were also significant for me. I loved experiencing Bill Young's determined energy. I loved basking in Stephen Huddart's leadership prowess. I loved seeing the intelligent vibrancy of Voilaine, Natalie and Tonya. I was in awe of the smarts of Erica and Alex. And I was enriched by Volker's hospitality. It was a rich smorgasbord of social innovative intelligence.

The content was critical, but so was the makeup of the group. The people on the trip made the trip. For a cohort that included people who had not met before we arrived in Montreal,  relational trust developed very quickly and within days there was both important collaborative work being done, and frivolous shenanigans that has continued on our WhatsApp group.

It was quite simply the best developmental work thing I have done in decades. As was the case for me decades ago; I believe our work matters and that together and with others we can change the world.