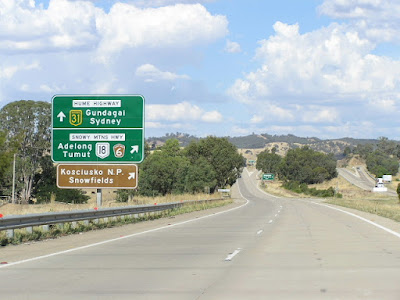 I rekindled my love affair with the north bound lanes of the Hume Freeway today. I awoke earlier than I wanted with childlike excitement for what has become one of my favourite days of the year - July in Byron Bay departure day.

In the years we lived and worked for three months of the year in our caravan on the northern NSW coast, the excursion from Brunswick northbound held such deep joy. I developed an irrational love of roadhouses and monotonous bitumen because of what they they symbolised. Today I was on my own and apart from the pain of navigating peak hour traffic up the Princes Freeway and around the Western Ring Round, the trip up as far as Holbrook was defined by frigid outside temperatures (at Oliver's coffee stop at Wallan my weather app confirmed 'feels like 0') and heavy drizzle.

But in my warm drivers seat with Spotify's Aussie Rock Classics on loud - I was laughin'.  Then later in the day as the roads dried, I sought out the old travel, beach and surf- themed playlist I created back when we spent all those hours heading beach-ward ... a happy day indeed.

900+ kilometres today. Had to do a couple of hours work but now its time to stack some Zs and contemplate the NSW trek tomorrow.