- March 24, 2018
This post is part of a series where I'm recording the appreciative thoughts and emotions associated with various spaces in our house. For context, read my post Thinking about houses.

There are two spaces in our house which are mostly mine. A right turn at the front door leads up a straight wooden staircase which leads away from the hospitality and common areas to a private second floor. I love my office; the light comes from the west so in the mornings the tones are softer and being furthest away from the road, it is also the quietest room. 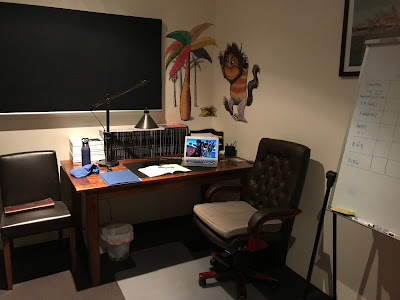 The desk is the dining table we bought when we rented an apartment in CityPoint (Melbourne CBD), so it has always been associated in my mind with working away from home. It was also the table around which we gathered regularly as a family so has the memory of shared family meals on its surface. I love its deep cherry colour and slightly rugged feel. When we found it at Freedom Furniture in 2013, I instantly knew I had found what I had been scouring the stores for.

There is a line of black spined journals at the back of the desk. Three times in my adult life I have given away most of my books. My commitment is to retain only the number of books that fit on my one bookcase. One of the problems arising is that my journal collection has nowhere to go, so again most of them get recycled. Except for a few collections which I keep; The New Philosopher; Dumbo Feather; Kinfolk and Monocle. Monocle has been an genuine inspiration for me for many years. I have already once given away a couple of years worth (two purges ago), but I have chosen to hang on to my editions from 2012. With little shelf space they sit on the back of my desk (the black spines.) Monocle has an elitist feel that I don't warm to, but overall I love the mix of British and Japanese sensibilities. I experience irrational joy when, after all these years, I sit on the couch and crack open a new edition. It inspires me because of three things:

1. The unique cocktail of the six focus areas; Affairs; Business; Culture; Design; Entertaining; Fashion. (Yep, ABCDEF for the observant).
2. The media is predominantly old school; hard copy and radio. In the early days there was no internet presence. I find that it therefore pays attention to things that I feel are sometimes lost in the digital age; a commitment to the quality of the tactile sensation of engaging media.
3. The journalistic style showcases what is working (rather than what isn't) from across the globe. I get to read about the ABCDEF from places I've never heard of, without it presented as novel. I love having the Monocle spines face me every time I sit at my desk.

On the wall in the corner is wall art from the children's classic Where the Wild Things Are. I did not put them there. Before we lived here it was a child's bedroom and I like the idea of retaining this playfulness in what sometimes feels like a serious space. 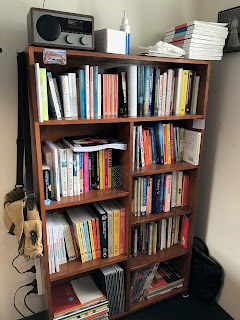 The bookshelf was an engagement gift from our friends Jenny and Brett 30 years ago. At the time, I was used to buying op shop or cheap pine furniture, so to receive a quality bookshelf with half a dozen coats of varnish felt like luxury. It still looks like new. As mentioned above, I have given away most of my books three times. When we moved out of our office in West Melbourne, I decided only to keep titles that had meaning for me. The books on these shelves are not the best books I've ever owned but they are the ones that have been most formative. Only a few authors get multiple titles: Alain de Botton, Peter Senge, Christopher Alexander, Adam Kahane, Naomi Klein, Henri Nouwen. For other favourite authors I've chosen their seminal work or the one that has formed me most deeply. (eg. Jonathon Haidt, A Righteous Mind; Ched Myers: Who Rolled Away the Stone?, Patrick Lencioni: The Advantage. I am currently wondering whether more than one of Nassim Taleb's Incerto series deserves a permanent spot, and if only one, which one?) Every book on the shelf is a long conversation if you were to ask me about it. The collection is visible on my Goodreads account.

A few titles have multiple copies. At any one time you will find bulk copies of Fredric Laloux's Reinventing Organisations (both academic and popular editions); Adam Kahane's Collaborating withe the Enemy and Patrick Lencioni's The Advantage. These are my three must read progressive organisational leadership resources so I give them away regularly.

On top of the shelf is a retro internet radio, a recent but prized piece of equipment. The stack to the right is multiple complete collections of The Alpine Review, the think-style magazine that I rate as one of the best magazine publishing projects I have encountered. 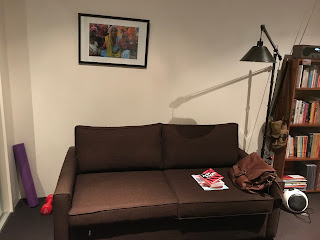 The couch is special. It's where I sit in the evenings to read, or where I retreat to if I need to digest hard copy material. We bought it when we moved to the Sunshine Coast at the beginning of 2013. I removed the leather-top desk and captains chair from the library in our West Melbourne office and replaced it with this sofa bed so I could sleep there during the week when I was back in Melbourne. It then moved to CityPoint (the apartment we rented in the CBD) and began its life as 'the kid's bed'. Then and now, it is the first bed to be used when people come to stay. So while this is 'my space', I love that it also doubles as the bedroom for family and friends.

(When Heidi stays, it's not unusual to find cartoons left on the whiteboard ....) 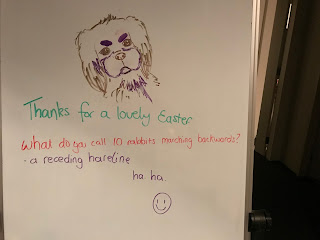 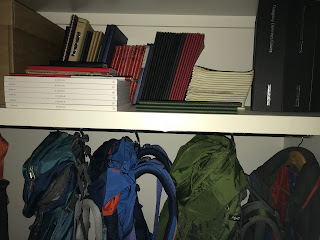 This photo (above) won't mean much to anyone else, but it is heavy with history for me. Ever since I was a little tacker I kept a journal ... or in the early days it was a retrospective diary. (As in: Saturday, March 3rd 1978; "played cricket all day"). I began the practice of writing my ponderings about life on paper while living in Japan in 1981. This cupboard holds a box and rows of journals from those early childhood ones to recent years before blogging and Evernote encroached on the domain of paper and pen. Alongside the introspective musings of my evolving mind are rows of work notebooks. Initially (from May 1991) they were Collins hardcover notebooks, but since April 2006, Moleskins.

Even though the room is an office and so has a sedentary style, behind the mirrored wardrobe doors is a recreational theme. One wardrobe is where all our bushwalking gear is stored and on the far side is all my cycling stuff. When I sneak out of bed at 5.20am, I come in here to get ready to ride in an effort to allow Maria to keep sleeping.

Other things to note:
This is my work space and my retreat space. It is a place where I am extremely productive. It is also a place with stuff that I value. I know I am incredibly privileged and at the risk of being misunderstood, I'll say I am a materialist. In a podcast interview with renowned minimalists Joshua Fields Milburn and Nicodemus Ryan I listened to last week, they provocatively say that the problem is not that we are materialistic, it is that we are not materialistic enough; by which they meant that we don't value our possessions sufficiently. We buy too much stuff that adds no value to our lives, rather than only having things that do so. That theme, what I prefer to call essentialism, will be a recurring theme in these posts.


"Deciding what is essential in our lives isn't about paring back our belongings and foregoing our beloved but unnecessary frivolities: Instead of determining how little we can live with, it's about working out what we simply can't live without."
from Kinfolk Volume 16