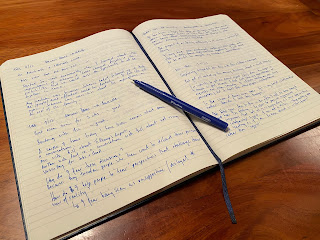 Starting on my birthday in early September last year, I set out on a journey of observation and curiosity that has profoundly helped me.

The first time I ever did something similar was back in my uni days, when, for two weeks, I recorded everything I did and the time I spent doing it. I was curious to see how I was spending my time and if it reflected the story I told myself about what matters most to me. The point being that sometimes the story we choose to believe about ourselves is not matched by the incontestable data. Even though I didn't broadcast what I was doing, a couple of my mates found out; they thought I was bonkers. What kind of nutjob does such things?

This last years year's journey was not about gathering data about something as simple as time. It was something much more difficult. There were two things that happened that provided the incentive and impetus.

The first happened at the Mullumbimby Farmers Market in July. We were lucky enough to spend a few months based in the Northern Rivers area during winter last year (2020). It was our happy habit to do our weekly  fruit and veg shopping at this wonderful community market. I was also working remotely during the period we were there and on this particular day I had some work I needed to do, so was sitting in the car park with my computer and phone doing what had to be done. It was a particularly beautiful day and while I was in the car, Maria and our daughter and brand new granddaughter were wandering carelessly around the market, sitting on the grass and soaking in the chilled vibe. On the outside I was just tapping away, inside I was fuming with resentment. When I finally finished and walked around trying to find them, I was so churned up with irrational resentment that I couldn't enjoy what was now mine to take in. There was nothing remarkable about the work I had to do, and it was completely reasonable that I should do it. I'd been to the market many times before and would be there again the following week. I was as cross with myself for feeling cross, as I was for having to work. That night I wondered why I had reacted as strongly as I had and wondered what it would take never to do so again.

The second, which actually happened just as I was getting started but gave greater clarity to the work, was some thinking about freedom, which I write about here. I was inspired to ask what freedom meant for me after reading Nick Jaffe's excellent post. I concluded that for me, freedom meant being able to chose my emotional state in order to be my best in the world - all the time. I was interested in what it would take for mastery; that state of being where, whatever was going on around me, I had mastery of my reactions and initiatives so that I could always be my best self.

And so on the evening of Sept 11, 2020 I sat down with pen and notebook to take the first step in a remarkable journey. I had determined to dig deep into emotional reactions that disrupted my sense of peace and joy. I set out to do some daily forensic analysis of conversations or experiences that resulted in me being less than my best, either by emotion or action. Or sometimes it was simply that I felt anxiety, and I wanted to try to understand why.

To be clear, I wasn't pursuing pollyanna happiness. There is a time for anger. Shit happens and there can be legitimate cause for worry. This was about personal mastery ... a higher way of being. To be honest, I was inwardly skeptical that it would lead to anything I didn't know about myself already because the truth is I've studied and practiced mindfulness and self reflection intentionally and deeply most of my adult life.

My method was simple. Everyday in a notebook I would record location and basic activity. Then I would dig into anything feelings of anxiety, disruption or lack of harmony. I would be forensically curious about relational dynamics that felt a bit off kilter, and I would keep asking 'why?' through the layers of answers until I felt like I got to the root cause.

Just like my timekeeping exercise in the early 1980s, I wanted to interrogate the story I had become used to telling myself about who I am and my place in the world. I had a suspicion that I lost emotional poise because I was suppressing stuff that I wasn't allowing myself to believe, or that there were triggers that I was oblivious to.

It took a couple of months, but patterns began to emerge. I was able to identify a number of triggers that thwarted my 'zen'. All of them related to reality (behaviour, circumstances etc) not matching the image I had created / designed in my mind. (I am not going to list the detail here; that feels like psycho-spiritual pornography, and besides, stating them sounds much more benign than they feel in my heart and mind.).

For each of them, I started to experiment with remedies and responses that would restore 'wholeness'. I knew something good was evolving when I began applying the mental strategies I had developed and they altered the trajectory of how I was engaging people and life. I ended up with four restorative mindsets, that proved themselves by their recurring effectiveness at combatting states of mind that rendered me less than my best self. I was pleased with the value of the discipline.

As the weeks and months of the new year began to pass I found myself writing less frequently (missing some days) but I noticed some new more positive practices started to emerge. Instead of waiting until my inner being started to feel disruption, (when I would apply one of the four restorative mindsets) I wondered what positive affirmations might 'head things off at the pass'.

Confession time: I have not been a fan of trite self help slogans that get hung on walls, printed on greeting cards or daggy ornaments. Then one of our daughters developed some affirmation cards for herself to use during a challenging period of life. I recognised that instead of being disembodied slogans, they were born out of pain and an experience of living with unhelpful mental models that were deeply embedded. Affirmations were statements of truth to combat falsehood, weapons of positivity and life when negativity stalks us.

Without deep inner work, affirmations are just slogans, but as the 'simplicity out the other side of the messy and painful work of relentless self examination', they can act as beacons of life. And so I set out to develop my own affirmations ... what were the unique truths I needed to inculcate, indoctrinate myself with, that would help me achieve mastery?

I ended up with only two, and it took the first half of this year for them to crystallise. I now meditate on them every morning. Most mornings I get up early to greet the day in the ocean, go for a run, a ride or walk the dog with Maria. Before I go down stairs I lay on my back on the floor with my arms above my head, and I reinstall the mindset that comes from my two affirmations. Everyday.

So how is it going? It is difficult to express in simple language the state of being I was trying to eliminate. As I've said above, it can be approximated by words like anxiety, frustration, agitation, irrationality. Sometimes I would describe it as disruption to my soul, my peace being disturbed ...

This year I have been on the brink a few times, but the tools I have developed have enabled me to reestablish the agency and posture that I want, and not once have I had to live with the emotions that have derailed me in the past. There is a way to go, but the times I have been below my best, have, without doubt been reduced. (I feel like I need to correct a possible misunderstanding again ... I'm not talking about not experiencing legitimate negative emotion - I am talking about being below my best if and when those emotions arise.)

I don't want to say what my affirmations are in this context - it feels like it cheapens their value without the lived experience of their development, suffice to say they describe the person I know I am when I am at my best. As September approaches again, Maria and I are embarking on another, completely different slow and deep listening project. I can't wait to see what we learn ...

PS. After posting this Maria and I had a long discussion about my use of 'mastery' as a frame. I have used the term as it is used for mastercraftspeople, as the description of someone at the top of their game; master builders, master chefs and as in martial arts. However, I appreciate that some may assume I am talking about perfection, of illusionary control, which I do not intend. The personal mastery I am searching for is about the quality of response and outcome based on inner world disciplines, matched by outer world competencies. I will stand by the use of the term for now, but understand it is an inadequate metaphor for what I am trying to describe.