Old Woman Island and other things

This autumn and winter we are spending a lot of time on Gubbi Gubbi country. 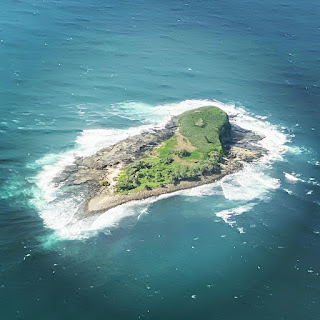 We had only been in Mudjimba a week or so before the anchoring effect of Mudjimba/Old Woman Island, which sits about two kilometres directly off the coast, started affecting me. We’ve been here in the past and the ‘island off the coast’ was just that. But being in its waters every morning and feeling the land in my body, I have surprised myself with how accustomed I have become to its presence.  It is ridiculous to say this after just two weeks of being here, but I think I will miss it when I’m back in familiar waters. 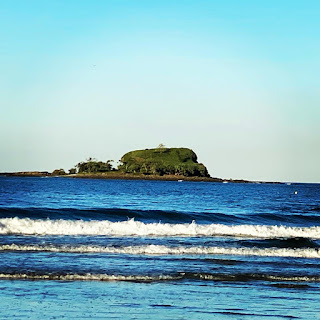 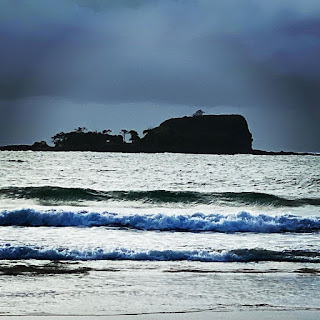 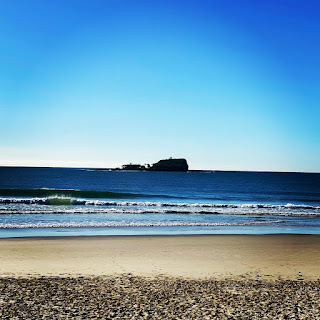 Yes, my journey over recent times has included a greater openness to indigenous ways of knowing and alongside that a personal commitment to live more in my body (rather than just my head) and to acknowledge how much my life and living is part of a much greater whole. But sensing the ‘life’ of an island is not something I have construed to fit an ideology. It has happened within me involuntarily. I experience this, not as a tinkering around the edges of the consciousness I have grown up with, but rather a profound new 'knowing'.
I find myself being curious about the limitations of western world views. It shakes me profoundly to begin to see the veil of superiority associated with so-called developed civilisation fall away. Anyone who thinks that democratic capitalism, neo-liberal economics, scientific rationalism and digital technology are not the pinnacle of social evolution, is considered a bit loony in polite society. Seriously. But what if the ways of being that got us into this global mess are not sufficient to get us out of it? Seriously. What if we shouldn’t just expect indigenous communities to integrate in relevant ways into our ways of being but rather we need to sit at their feet and take notes (or not, maybe write in the sand or dance!)? What if what we’ve been taught to categorise as ‘primitive’ and ‘animist magic’ actually include higher orders of social evolution. What if the urban symbols of education, wealth and privilege are actually spiritually cancerous blinkers or even blindfolds?

Maria and I have a spectacular lifestyle. We live in a great house in an iconic beachside village. At the moment we are relatively healthy and not only love but really like our family. We are lucky to have an itinerate lifestyle, based on our love of interstate friends and family, Tasmania, Northern NSW and the Sunshine Coast. I’m conscious that all this probably disqualifies me from having any credible voice about alternative ways of living, because it wreaks of privilege. In my defence, I confess to a constant struggle to live with integrity.

We are relentlessly frustrated with our attempts to live consistently with our espoused values. Social inclusion, conscious consumption, environmental drawdown are pin-up lefty ideologies, yes indeed. But they also happen to be things that we think matter deeply. We long to do more than tinker around the edges. We fantasise about variations of opting out, but we feel stuck in a system that unacknowedgingly values power, convenience and comfort above pretty much everything else. The hypocritic irony is that I’m tapping on a keyboard on an aeroplane ….

Is doing your best within a pathological system enough? Is there any way of living that is not full of compromised integrity?
One thing I do know, being aware of the ‘life of the island’ off the coast at Mudjimba is good for me. It is the ‘wardrobe’ in The Lion, the Witch and the Wardrobe, it is the catholic icon. Some believe modern society is destined to reach (technological) singularity, a point at which the superintelligence of computers irreversibly affects humanity. Commentary is often gilded with fear. But what if there is another kind of singularity that has already existed, that our natural environment is way more intelligent that we have given it credit for? What if trees really do communicate with each other? Rather than fear, this idea makes me firstly embarrassed, and mostly grateful and hopeful because cultivating a healthy relationship with the land may well be our salvation.
(PS. One of the fabulous things about where we are in Mudjimba is that the closest coffee is at a great place aptly named Island Surf and Espresso. Not so fabulous is when I look up and see that the holiday apartment block in the floors above is called Santorini. Don't get me wrong, having spent some time there, no arguments from me about Santorini having being one of the most spectacular coastline views on the planet. But it belongs in Greece. Why you would name a property with views out toward the thoroughly Australian Old Woman Island 'Santorini' is beyond me. Imagine a motel near Stonehenge being called 'Uluru'. Ridiculous.)