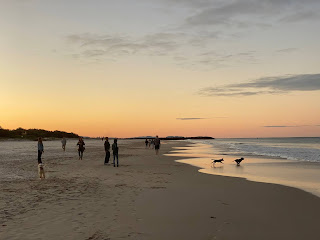 Brunswick Heads feels like a yurting/caravan-ing spiritual home of sorts. That's overstating it, but there is something about this place that has drawn us back so many times since we accidentally found ourselves here in June 2009. Well not really accidentally, because we intended to be here, but then it was a random unknown place on the NSW north coast.
Our first stay here was memorable. It was the first stop on our first trip with our first caravan. We wrote about it in a some blogs here. Whether the features of the town design were intentional or not, they work. The park between the main cafe strip and the river is more than incidental, it is sprawling and inviting. The Hotel Brunswick, with its outdoor dining area between the simple but grand hotel building and the hedge-lined street is one of the first things people note when they mention this town. Simpson's Creek separates the town proper from the main beach which is punctuated by the landmark breakwall alongside which the Brunswick River empties into the ocean. Access to the beach is via the iconic wooden footbridge, after which one of our favourite Cafe's is named.
Our first stay here was memorable. The kids boogey boarded down the sand dunes (now not so high). We stumbled on a live gig by the Lucky Wonders and their music became the soundtrack of our yurting adventures for many years. The sandbars and open sea make it much less suited to surfing than 10kms around the bay, but the beach is spectacular. Its broad open stretches of sand are intoxicating and the sky always feels huge as it reaches down to the horizon. And perhaps more than anything else, we were attracted by the palpable sense of community we witnessed all those years ago. Sadly, that sense of community feels less inclusive these days; understandable when one's home is constantly invaded by people like us.
This time it will be memorable too, but for different reasons. It's weird now. Our friends and family are in lockdown in Victoria and we're up here doing pretty normal stuff, notwithstanding the physical distancing and obsessive personal hygiene rituals. We had no idea when we left Barwon Heads in a hurry in early June that we'd be leaving behind a second wave of COVID-19. After 3 weeks in a caravan park in Lismore waiting for our first grandchild Willow to be released from neonatal care after being born six weeks prem, we then spent a couple of weeks with Luke, Johanna and Willow on the farm in Cawongla, and now we've made the pilgrimage to Brunswick Heads.
Yesterday morning, on our first morning walk along the beach, we were greeted by the sight of whales, breaking the surface only a couple of hundred metres out. The early morning sand was cold under my feet but the salt water on my skin was delightful. The coffee at Footbridge was good and the fishing along the many dirt tracks along the waterways must have been good too judging by the number of lines in the water.
It is perhaps no coincidence that we have chosen to make Barwon Heads our home and we also feel drawn to this little town. The corny but formative Sea Change put our home village on the map, but when a tight filming schedule for the recent return series had to be filmed during winter when conditions were not ideal down south, they had to find another town with a similar spirit. Brunswick Heads. 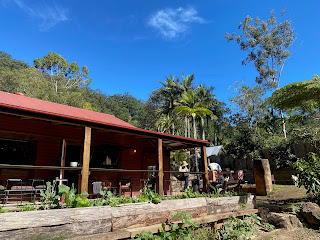 Today we drove via Mullumbimby to the wonderful Lilium Cafe in Wilson Creek. It was a tip from our friends Ross and Anne, so it was kinda special when they turned up while we were there so we got to sit and muse together for a couple of hours. Back in Brunswick Heads I sat on the beach for a while to take in the interactions between people and the environment before I donned the googles and did some river swimming. Happy.