What if there are other ways of knowing? 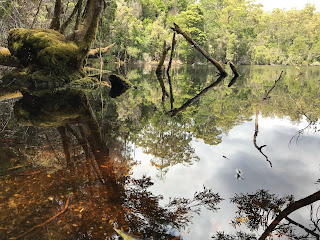 Youtube videos of people seeing and hearing for the first time will probably make you cry, at least they did for me when I watched a few. That moment when a whole new way of experiencing the world opens up is akin to a rebirth that changes everything.

Over the last couple of months I have been wondering a lot about ways of knowing. It's a weird idea right? If you had suggested to me six months ago that there were different ways of knowing things and that the way I had been taught to 'know' and navigate the world was deficient in some important ways, or at least could be enhanced significantly by other ways of knowing - I would have thought it was you that had the problem, not me!

I have been learning how much we have been taught to live in our heads. The 'map' we learn is that our brain is the control room. Our body does what our brain tells it. Our intelligence and worth is derived from what goes on in our heads. The English language reinforces this with countless idioms such as 'she has a good head on her shoulders'; the idea that 'top down' is authoritative, the 'head of an organisation' etc etc. It is everywhere.

It is confronting to realise that the five senses we can all recite as the five senses are but some of many senses we experience, but they enjoy elevated status because they are understood as one way inputs to ... you guessed it ... our brains. Of course, there is nothing wrong with developing these senses, indeed without them, navigating our way in the world presents significant challenges.

But there are other senses. Some we have words for (eg hunger), some we name but put in a different category (gut feel, or intuition) and others we don't even name (such as an infant's sense of its mother's mood). Such is our commitment to the Chosen Five as Philip Shepherd calls them, that we try to explain the phenomena of the others using psychological explanations. In other words, we take it as a given that the brain in our heads controls everything, or more precisely, that we know things due to the inputs the brain in our head receives.

For simplicity, let's talk about cognitive knowing (with our heads) and embodied knowing (which draws on a whole range of senses ). Now I am a Johnny-come-lately to this stuff. Some people who are reading this will be much more practiced in what I'm calling here embodied knowing. Thank you for your patience with the rest of us. Whenever I have been in environments when people have facilitated practices that are designed to help me be more attentive to the other senses (sensations) in my body, it has felt a bit awkward and, at least from my experience, has rarely sat comfortably in the context. (I suspect now my inability to engage had more to do with the context and my poor awareness than the practice itself.) However, I am grateful for having recently been with people for whom embodied knowing has been their normal way of being. There was a 'penny drop moment' for me in a particular use of language: I have been in many situations when I have been encouraged to be attentive to by body; listen to what my gut is telling me; notice what is happening to my breathing etc. But this frame affirms the brain as king. 'I' am my brain. 'I' listen to my breathing. I attend to by gut. etc. The 'penny drop moment' was when I was invited to listen with my body. That changed everything in an instant.

I empathise with you if you're tuning out at this point. Col's gone loopy I hear them snigger or worry. Maybe I have :-) but here are two very big questions that are keeping me awake at night.

1. The way we have been taught to know has led to fragmented knowledge. This is uncontestable, right? Our sophisticated analysis of 'things' is done by pulling them apart. We divide knowledge up into disconnected disciplines and the scientific and medical advances of doing so are breathtaking. But the emphasis of knowing in our heads has effectively fragmented our beings. We don't know much about our bodies other than via clinical scientific analysis. And we therefore don't know much with our bodies. Here's the big thing: The cascading implication of fragmentation is that we understand ourselves as being seperate from each other and the natural environment. In other words, if we understand our identity as being defined within the boundary of our skin, of course we will think of ourselves as independent beings. But what if there are other ways of understanding our identity? What if we really are all connected? Not in some clever cognitive new age way ... but in a traditional, ancient way.

2. So here is the nub of this post. What if we aren't that clever after all? We have told ourselves progress and growth is good, and the spiral is inevitably upwards. The message we have adopted unquestioningly (and perhaps, just perhaps, foolishly) is that we are developed, advanced, smart and innovative. But from a different vantage point, our society probably looks like a massive example of collective stupidity; our systems and processes are effectively unable to help us navigate out of our predicament of fragmentation and disconnectedness.

Could it be that we need radical new ways of knowing? Could it be that our frantic attempts to innovate our way forward with the same thinking that got us here, will effectively just get us to 'fragmentation status quo' faster. What if recovering traditional ways of knowing was not a mere exercise in political correctness and a step backwards, but an imperative for our collective and individual healing and a key to the development of a consciousness that will lead us out of this unbecoming mess in which we currently find ourselves?