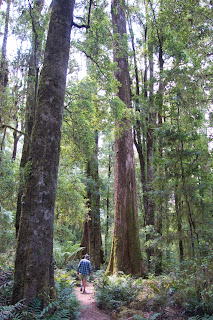 When I was at Uni in Hobart in the early 80s, Shane Howard and his band Goanna toured Tassie. It was in the midst of the campaign to save the Franklin River, and Howard wrote a song (Let the Franklin Flow) that became a bit of an anthem (think shouting along on road trips) for me and few of my mates. I had no idea really.

After a cruise up the Arthur River today, the so-called last of the wild rivers in Tassie, I was drawn to reflect on the lyrics again and found a Youtube clip of Howard telling the story behind the song. This trip has been full of new emotions and experiences but somehow they are all grounded in our pasts.  (Maria grew up south of here where her dad worked for the Hydro and I grew up north of here on the coast) My sense of connection to the land and appreciation for the first nations people who have lived here for tens of thousands of years has surprised me.

On a visit to The Neck lookout on Bruny Island a commemorative plaque for Truganini (considered to be the last tribal aboriginal to die) was all but ignored by the tourists who took it in turns to take selfies with the spectacular curves of the twin beaches in the background. I found myself reacting strongly to the ignorance. Knowing she died at the settlement on Flinders Island, I was curious about why the plaque was in that spot. It didn't take much research to find out; her father had been the head of the community who had been living on Bruny Island in the early 1770s when the European explorers sailed passed. I posted something on instagram about it and lazily reflected the language around her identity that I had been taught at school. I was rightly corrected (thanks Sarah) from suggesting she was the last Tasmanian aboriginal, an offensive statement to the community of people who currently identify as Tasmanian aboriginal.

Our Tasmanian sojourn has happened while the devastating bush fires have swept through the country. In our caravan I keep the copy of Dumbo Feather on 'embracing the wild', but it hasn't been until this trip that the interview with Victor Steffensen on the indigenous practice of managing the land through fires has taken route in my thinking. If ever the authorities needed to listen to and learn from our first nations people who understand this stuff ....

In our travels around this north western corner of Tasmania, I don't think I've ever been as conscious of the evidence of aboriginal occupation of the land. Middens are everywhere. Carvings are relatively common. We have found ourselves being aware of the landscapes in the vicinity of the middens as we've stumbled across them and becoming conscious of the environments around which they exist and their suitability as meeting and eating sites.

I guess it is peak tourist season, but there aren't that many people around. Maria and I have often (in fact mostly) found ourselves alone in forests and on coastlines. Being unhurriedly in wilderness changes us. Your silence sings to me (Shane Howard). I suppose that as human beings, most of our time has been lived pre-industrialisation, so the patterns of living we adopt to fit into contemporary society are only recently learned. Being in the natural environment connects us to something profoundly centre-ing. It connects us to who we really are; or can, at least, if we allow the time.

And the people who have lived here for (effectively) forever, struggle to get their voices heard in intelligent decision-making environments about how to live with country. There is no doubt that their wisdom will eventually be engaged by those in power, but I feel grief at my complicity in a system that is so intoxicated with economic growth that we end up in pathologic relationship with the natural environment and those who understand it best.

Tonight I watched Patagonia's short film on the Takayna (Tarkine). It's political. I don't know what the solution to local jobs is. I do know that history will inevitably look back on old growth logging as an abomination. We have seen first hand the scaring and destruction as we have driven countless kilometres through the forests. Today we stood beside ferns that are 600+ years old. Trees like this and others that are 100s of years old are being felled to make way for plantation forests. As the timber worker in the film says, timber can be a fabulous sustainable industry, indeed we need a thriving forestry industry. But clearfelling old growth forests and ecosystems that have taken hundreds of years to develop .... that can never be sustainable despite government rhetoric (on the signs all over the Tarkine) to the contrary.

We've had an amazing time in Tassie this January, but it has also been sobering. Terry Patten's A New Republic of the Heart has been my evening text. I have been pondering how our social economy can transition and am conscious of how much our lifestyle and choices are part of the problem. There is hypocrisy in my life everywhere. Perhaps sitting wth this knowledge is part of the healing and evolutionary process ...