The bucket list thing doesn't work for me, I think because in my experience satisfaction is an inner world thing rather than an experiential one. But that's not to say that there aren't some things that have felt like unfinished business, and one of those things has been to walk The Overland Track.

The story goes back a long way. Cradle Mountain was in my backyard growing up. I remember driving up there for family outings ... in those days there were windy country roads, cattle grids and slippery muddy tracks that eventually got us to Waldheim Chalet and then on to Dove Lake. At uni I had friends who loved and knew the Park. I listened to their stories of the Pelion mountains and the iconic track that led south toward Lake St Clair. I climbed Cradle Mountain in Blundstones and one of those checkered woollen bush shorts. I sat with some friends in Cradle Mountain Lodge and ate dinner at what used to be communal tables where you served each other while the devils and other wild life came to feast from the tubs of food scraps left outside under the light so the humans inside could watch them.

I would openly say that Cradle Mountain was one of my favourite places on earth (and still do). I took Maria there not long after we met and we stood in the boathouse on Dove Lake while the water lapped our feet. We would return there on our honeymoon.

Many years later, as was our custom, we took all our staff team and their families, a group of about 40 adults and kids, away for a long weekend. The days we spent at Cradle Mountain via the Spirit of Tasmania was an unforgettable experience for all the right reasons.

But I had never walked The Overland Track.

In my defence, I never had the right gear. It is cliche to say the weather changes quickly up there and that it can snow in January, but that's because it is the absolute truth. And overnight hiking had never been something I'd done. Day walks, yep. But carrying tents and cooking in the open ... not so much.

Then a few things happened. Rachel, one of our daughters started guiding and her passion for being in the bush, especially the Tasmanian bush, started to infuse others in our little family, including me. Maria and I slowing started setting ourselves up to walk; you know, proper shoes, packs, jackets etc. And then Rachel, Zac, Jan and I spent four days in the Walls of Jerusalem and the appeal of self-sufficiency in the wilderness took hold. Maria and I bought that 'tipping point' piece of equipment, the hiking tent. And now there were no more excuses. The Overland Track beckoned.

There is never a good time, and last week was no exception. But we have realised over the years that the only way to do the things that we never seem to get around to is to do something very simple. Book it in. And so it was. And it happened last week.

The Overland Track appears in pretty much every 'best walks' list. I'm not experienced enough to validate that it is justified. All I know is that is gets you. It gets you in your bones. Those mountains. That winding track, the sense of destination alongside so many side-walk options that more often than not involve the summit of yet another spectacular landform.

I loved every step of it.

I learned the truth of the Nordic saying that "there is no such thing as bad weather, only inappropriate clothing". We stayed dry and warm for the most part. I learned that experiencing nature overnight without the safety of civilisation changes the way we engage it - for the better.

And I loved sharing the experience with Rachel, who's prowess and comfort in the wilderness inspired me. In the late afternoon and evenings, while we waited for dinner or bedtime we played the harmonica and read sections of Tuesdays with Morrie to each other. On one particular day, the first with clear skies, we climbed out of the rain forest in Pine Valley, clammering for the sunlight in the early morning and eventually broke into the bright crisp air above the tree line. We then got as far up The Acropolis as we could before the settled snow defeated us. We picnic-ed and lunched in the pure white snow at the base of the summit. We snoozed on a rock face on the way back down. We took it very slow, because we knew once we started the steep descent back in to the valley the sun would be gone and the cold would set in. So we savoured every step, slowly, slowly. It was a pearl of a day in a week I will remember for the rest of my life. 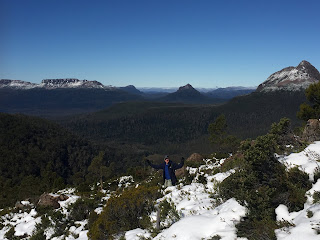 (So why is this post not full of beautiful pics? Two reasons. One, because most of the time my device was in a plastic bag in my pack. Secondly, because more so than ever, a photo offers so much less than the reality that it feels like it cheapens the grandeur to illustrate it with average shots, of which I've got plenty!) 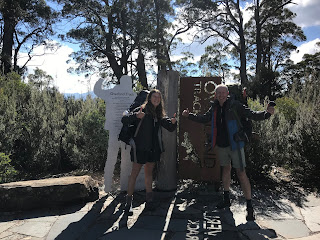