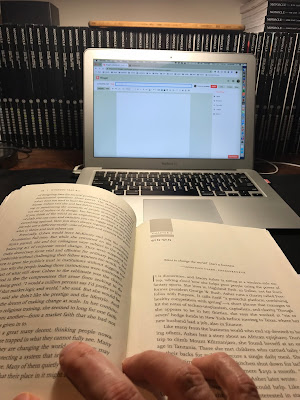 I like evenings in my office. I like the soft light, the feel of a book in my hand, the quiet tones of Monocle 24 in the background, the cherry brown wood and the darkness out the unblinded window. Sometimes I watch a TV show, and sometimes a wee dram of scotch keeps me company.

A couple of evenings back, while thinking about a book that takes aim at people like me (subtitled The Elite Charade of Changing the World) I found myself pondering some of the 'big' ideas that have shaped my view of the world (over the last couple of decades), and that I was introduced to by reading a book. It is true of course that we are enthusiastic about ideas that already have a seed in our thinking, but for me the following ideas, if they were not introduced by the author, were certainly explained and advocated for in ways that shifted me. So these are not just ideas with which I agree .... my bookshelf is packed with those. These are ideas that actually changed me, or catapulted my understanding in unusual ways.

I am not suggesting that these are the best books on the topics, although some of them are. They are simply the ones that have formed me. Some of these ideas are dangerous or at least provocative. Without reading the thorough argument, you might be tempted to dismiss them, I would be.

I have also learned over time that wisdom is proverbial, by which I mean that a wise perspective holds truth, but that is doesn't mean alternative perspectives are not also true. So it is the combination of complementary views that facilitate wisdom, rather than sharp and unrelenting advocacy for a particular view. "Many hands make light work" and "Too many cooks spoil the broth" can both be true.

In no particular order:

1. Jonathon Haidt, The Righteous Mind: Why good people are divided by politics and religion

Haidt shatters the illusion that our beliefs are rational. He shows how a very small set of values both unite and divide us in ways we rarely acknowledge.

The most potent framework I have seen (and I've seen a few!) for understanding people and society. Graves' framework tracks the evolution of human consciousness with detail and profundity.

Taleb is an elite provocateur so one has to take his open disdain for certain types of humans with a grain of salt. But his idea(s) are as paradigm-changing as they come. Rather than resist and guard against randomness, he advocates embracing it. However, to do so requires a deeply different perspective on decision-making; one that navigates us toward exposures that strengthen us under stress or disorder.

4. Anand Giridharadas, Winners Take All, The elite charade of changing the world

I intentionally read books that challenge my worldview, which is why I got this one. If you are educated and progressive, believe that changing the world can happen by engaging the existing systems of government and commerce, and wish to remain comfortable in that belief - don't read this book.

Oh my goodness. This alongside The Timeless Way of Building changed my appreciation for just about anything made well by people. It unlocked for me the answer to what I thought were unanswerable questions about beauty and function by masterful observations of patterns.

No other single book informed the framework for a significant piece of my personal manifesto as much as this masterpiece.

I read this book in the early nineties and it changed my view of women. Full stop. Without a hint of exaggeration, I cannot walk into a Myers department store (where always always always we are greeted by this pseudo scientific cosmetics b------t) to this day and not recall the profound and prophetic nature of this book.

Decades before The Gruen Transfer, Ms Klein taught me about advertising. Without her insight, how is it possible to navigate consumerism without being led like a lamb to the slaughter?

Stephen Covey taught us about personal mastery, but it was Senge's appreciation of the organic nature of organisations all those years ago that radicalised me. It seems so obvious now, but when I first came across the idea of systems thinking it rocked my world.

Along with Senge, Scharmer introduced me to the idea of spirituality in the business world. Presence, was my most treasured book for many years. It still enlivens me to read a snippet now and then.

This is my expertise. This is what I get hired to do. And so much of what I do, I learned from the principles and practices in these three incredible texts.

When I read this book over 15 years ago, it was the first time I felt compelled to buy multiple copies of a book (which I did) to give away because I thought everyone needed to read it. It was the first time I understood the power and collective intelligence of the crowd (in contrast to the priestly guardianship of truth). Revolutionary for me.

13. Jack Stack, A Stake in the Outcome

The insights in this business book - which effectively amount to the radical application of the idea of 'skin in the game' as an incentive to productivity - were so significant that Paul (Steele) and I flew to St Louis to meet Mr Stack (and the community of businesses adopting his ideas) and learn more about this radical idea of complete financial transparency and employee ownership.

It seemed when everyone else was talking about workaholism and work-life balance, this book gave me permission to be passionate about my vocation.

I've read a lot of books about leadership over the years; I came across this one in the mid 90s and it was the first one that argued (from his experience in running a furniture design company) that it was an art rather than science.

16. Ched Myers, Who Will Roll Away The Stone?

Into the archives now: not for the faint hearted or casual reader - faith as activism. Good grief, how much did this shift me all those years ago?!

I grew up in the Christian faith, but as difficult as it might be to comprehend, this was my first intentional and prolonged encounter with rigorous theology, and it blew me away.

And then there are some authors, publishers who's work has changed my understanding of the world. They are:

18. Alain de Botton, through countless books
19. Tyler Brûlé, through his vision and execution of Monocle
20. Patrick Lencioni, because his articulation of organisational health influences my work more than any other idea
21. Frederick Laloux, for applying the ideas of Clare Graves (see 2 above) to organisational consciousness
22. Andy Law, because even though Ricardo Semler was the Godfather of the movement, Law's St Lukes story was the first time I'd read an account of how to do business differently.
23. Edward DeBono, because despite being an arrogant prick, you are a genius who advocates for simplicity.
24. Adam Kahane, for applying the wisdom of 11 above to cross sector social challenges, and for his integrity and honesty in the process.