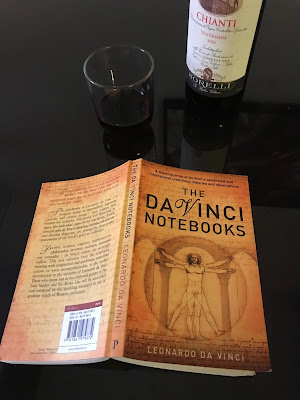 When I was in primary school we learned to read with class copies of old fashioned 'readers'. Of all the stories I remember just one called The Boy Who Wanted to Fly. Ever since then I have been fascinated by the extraordinary talents of Leonardo Da Vinci. It was therefore a 'must do' for me when in Florence to explore more of this strange character who seemed to be centuries ahead of his time in his imagination of science and technology.

I picked up a little book that includes a translation of some of his notes, and have learned so much more of this enigmatic, shadowy figure. What is common knowledge is that he was a master in many fields;


He seemed obsessed with automation. He invented a robot, he created machines that ranged from hydraulic saws to military tanks. Most of all, he wanted to fly. He designed machines that betrayed an understanding of flight inconceivably ahead of his time.

What I have learned is that he was the child of unmarried parents and had a strained relationship with his family which some would say is a reason his life was spent seeking (and mostly successfully gaining) approval from people he perceived as significant.

He made thousands of pages of notes; observations and ideas which he wrote in a script he invented himself, perhaps to protect the IP from others. I have understood, although shouldn't have been surprised that there was fierce rivalry between artists and cities. Some of the notes of Leonardo's I have read describe his criticisms of other painters' 'weak' attempts at creating depth in their painting.

He was dyslexic. He was openly gay and centuries before it emerged as a 'thing' he was vegetarian. He was notorious for starting things and not finishing them and in his notes shared his fear that his legacy would be his pile of written notes. But his brilliance made him something of a human tourist attraction in his time.