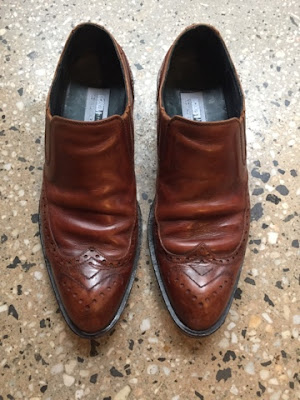 Johanna sometimes recounts an episode from 2008, when she accompanied me on a quest for a new pair of shoes. I can be a tad fussy, and she rolls her eyes when she recalls how long I took (not that long really, but shopping for men's shoes is not the stuff of little girl dreams).

This weekend has been good. Good company, food, coffee, surf, newspaper/magazine browsing and open day at the community garden where some of Maria's photos help tell the 'now' bit of the story.

... and as is my occasional habit, I lined up my shoes and gave them a polish ('that's such a dad thing'). I love these trusty old loafers. They have been to the cobbler a couple of times, but I like getting quality stuff fixed rather than discarding and replacing. Scandinavia shows us the way again with Sweden introducing tax breaks for people who repair stuff, everything from shoes to washing machines, those great people who offer an alternative to the disposable society.